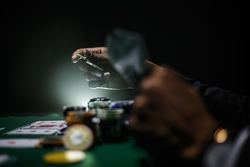 The six-handed version of sit-and-go single table tournaments is becoming increasingly popular. The level of play you are in will determine the strategy you should be applying to your game.

The first three levels of your six handed play should be a time when you examine your opponents and their style of play. The pots are small at this point and the only time it would be beneficial to be overly aggressive would be if you saw an opponent who could easily be wiped out. In the case of weak opponents, taking them out of the game at any point can warrant an aggressive move, and that logic would also apply here. Avoid bluffing at this stage as the pots are still relatively small and it is an unnecessary risk.

For the middle levels of play, you can begin to play slightly more aggressively. There has likely been at least one person taken out of the game at this point, meaning there are even fewer opponents to worry about. Use take down blinds and some check-raises to speed the progress of the game and further weaken other opponents whose stacks were already decreased from the first level. Bluffing check-raises at this point can also be effective as many people with lower stacks may feel pressured.

This is where you should be pushing your game to the max. You can almost be sure that someone remaining at the table will try to ride out their position in the hopes of making it to the end to collect. If you can pinpoint this person, you can exploit this desire and push them into folding, and systematically reduce their chips. Here you can be ruthless and bluff as much as is required to win. Remember when you get down to one or two opponents that aggressive play and betting on the flop are often rewarded.

Remember to hone in the less experienced and avoid those with enough of a stack who can take you out of the game.